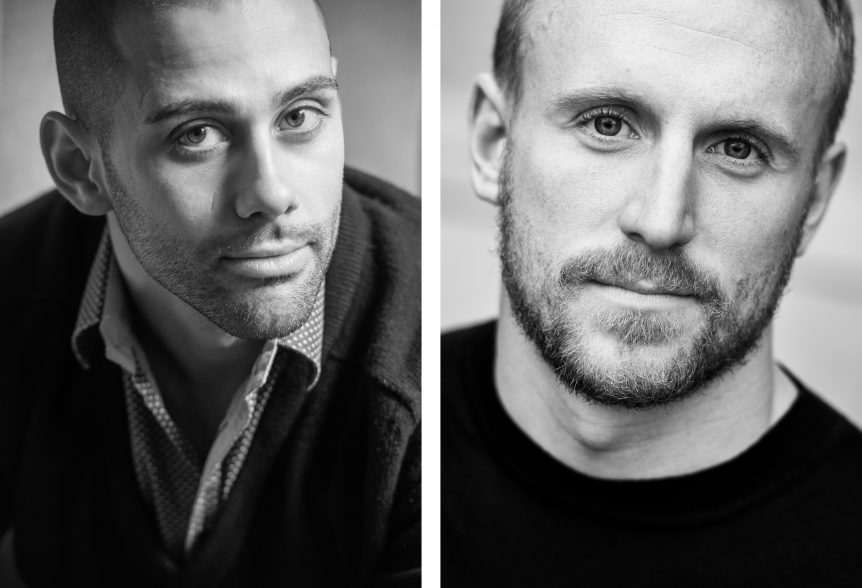 Two simple, naturally lit portraits of two lovely guys. Read on for three tips for emphasising masculinity in portraits like these, and how to pose guys without making them look posed.

Sam (left) is a builder and this image was taken during his engagement shoot. He has really engaging eyes that I wanted to make the focus of this portrait. It’s lit really simply: there’s a window to the right (as we’re looking at it). I asked Sam to sit and turn his face towards the light a little and then look back at me.

I met Adam (right) on the morning of his engagement. He had just proposed (and had his proposal accepted!) at Le Manoir. I loved the way he connected with the camera so I made the best of it by simply asking him to look into the lens. Like the first portrait, this one uses available light; I didn’t even need a reflector.

Typically, a male client will prefer a portrait of himself that subtly conveys some of the attributes that we consider ‘masculine’: strength, power, confidence.

There are a couple little tricks you can employ to add perceived masculinity to a portrait. Firstly, for a squarer jaw, ask your subject to clench his back teeth. This flexes the muscle at the bottom of the cheek and gives really good definition to the jaw line.

Secondly, asking your subject to lift or push forward their chin a little will accentuate their jaw line further. It will also decrease the visible area of his eyeballs: big eyeballs are typically considered feminine.

Thirdly, avoid shooting from a high viewpoint. This forces your subject to widen their eyes when looking into the lens, and also conveys a power disadvantage on your subject.

I’ve found that it’s best to keep poses very simple and natural, especially with guys. It’s so easy to overwork them, but then your subject looks uncomfortable or clearly posed. Instead, notice how your subject holds himself when you first meet him and you’re making small talk. Does he put his hands in his pocket? Fold his arms? Rest his weight on one side?

Then, when your camera is trained on your subject and – as is often the case – he forgets what he normally does with his limbs – guide him into a stance that is natural and typical for him. Adapt, tune or exaggerate as necessary for what you are trying to achieve, but use your subject’s genuine body language as a starting point.

This is why when people see my portraits, they often say, ‘Oh you’ve captured him perfectly!’. Often, they don’t realise what it is about the image that does this, but it comes down to posing subjects in a way that is authentic to them.