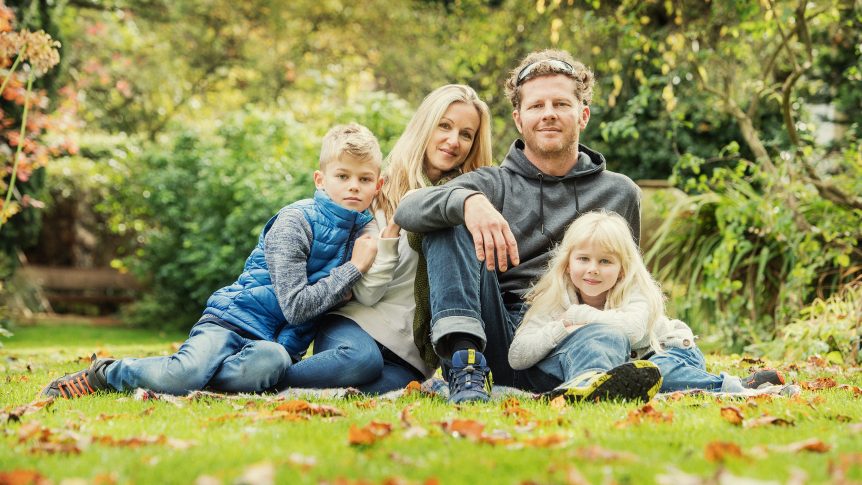 Creating triangles with a family of four

When you’re faced with a group of people, the easy option is to get them to sit or stand close together. Instead spend a little more time to position them so that the pattern of their heads in the frame creates a more interesting shape, like a triangle.

I was looking to create a shot in a wide format, so that it would fill the screen when shown as part of the video. I wanted a traditional family grouping, with everybody looking towards the camera.

The video was filmed in November 2017, and it was pretty damp outside. Luckily, these guys are an outdoorsy family, and they were more than happy to sit on a blanket on the grass in our studio garden.

There was incredible light that day – as you can see in the video, there was some gorgeous autumnal sun quite low in the sky, bouncing soft light all over the place, which meant I didn’t need to use any reflectors (look at the lovely sun rays hitting the dad’s cheek!).

Putting the pose together

I asked Blaize (the dad) to sit down first, and then tidied his pose a little. If I were judging this image, there are a couple of imperfections I would flag up, such as the Blaize’s foot coming straight towards the camera, and how his thumb looks amputated due to the angle of his hand. These are quick fixes in the moment, but much harder to correct in post-production.

I then asked Amy to snuggle in beside Blaize. Now, Amy is super slim with nothing to hide, but if you have clients who might be self-conscious about their figure, tucking them partway behind a family member is a great technique. The visible width of their body is reduced because it’s partly hidden, and this is incredibly flattering.

Next I got the kids involved. I asked them to look at mom and dad and suggest where they might fit in. Happily, their suggestions were spot on, with Kai cuddling up to mum while Calli jumped in next to dad. Again, if I were judging this, I would’ve liked Calli’s head slightly more over to the right of the image (as we’re looking at it). This tweak would make a more powerful composition.

If you imagine a line joining up the noses of everyone in this family portrait, the shape it would create is a triangle. In family and group photography, you almost always want to avoid having everyone’s faces in a straight row. At best it can look visually boring, but at worst it looks like a police line-up. Equally, you don’t want to position people with their heads aligned vertically (the ‘totem pole’ effect).

Instead, position people so their heads form a more interesting shape. One of the most powerful choices is a triangle: it’s angular, dynamic and makes for a successful composition. That’s what I’ve opted for here.

At the same time, this pose doesn’t look unbelievable or forced. It has a close-knit, natural feel to it.

Now, with everyone in position, I set my aperture so that my depth of field was enough to ensure everyone’s face would be sharp, but not enough to make the background become distracting.

Lastly, I lay on the ground to lower my camera angle. This helps to minimise how much of the blanket is visible, leaving all the focus on this lovely family.