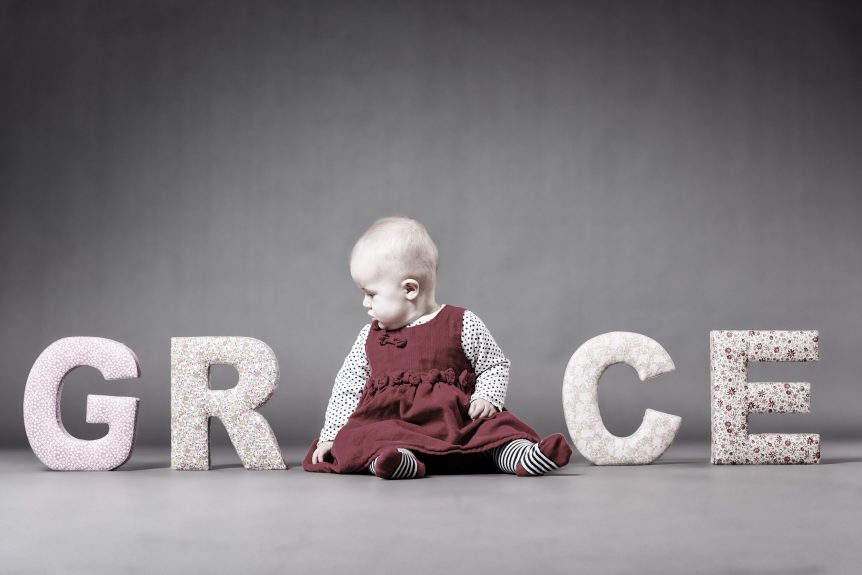 When Grace’s mum turned up at my studio with her daughter’s name in big fabric letters, an idea started to form… Follow my thought process and find out how I turned it into a reality.

Grace is the daughter of one of the couples whose wedding I photographed previously, Amy and Jonny. When they came in, Amy mentioned she had brought some props but nothing quite prepared me for the soft, fabric letters spelling out her name!

Look to the light

Once I could see what the shot was we had to sort out the lighting. This is a single, big flash to the left and fairly low down to the floor. Although the floor and wall look grey, they are in fact white vinyl. But, with no light reaching the back of the studio, the white looks much darker, like a mid-grey. There is a little bit of vignetting applied to the image but not too much – it’s mostly done with the lighting.

Once the light was in place, I knew I wanted Grace to look towards it (i.e. to the left as we’re looking at it). So I asked Jonny to go the side next to the flash and get her attention. This only half worked as Grace looked to her dad and then immediately became engrossed with the letter R. Who knew an ‘R’ could be so fascinating? However, that made the shot even better in my opinion.

Too young to run away

This age is great for photographing small children because they’re sitting up (so I can get really lovely full face portraits) but they’re not yet crawling or walking so won’t run off anywhere. That doesn’t mean they’ll always cooperate but it does increase your chances!

The final colouring is just a hue / saturation layer in Photoshop with the saturation level reduced. This makes the image become primarily about the form of the subject and the letters, rather than focusing on the colours.