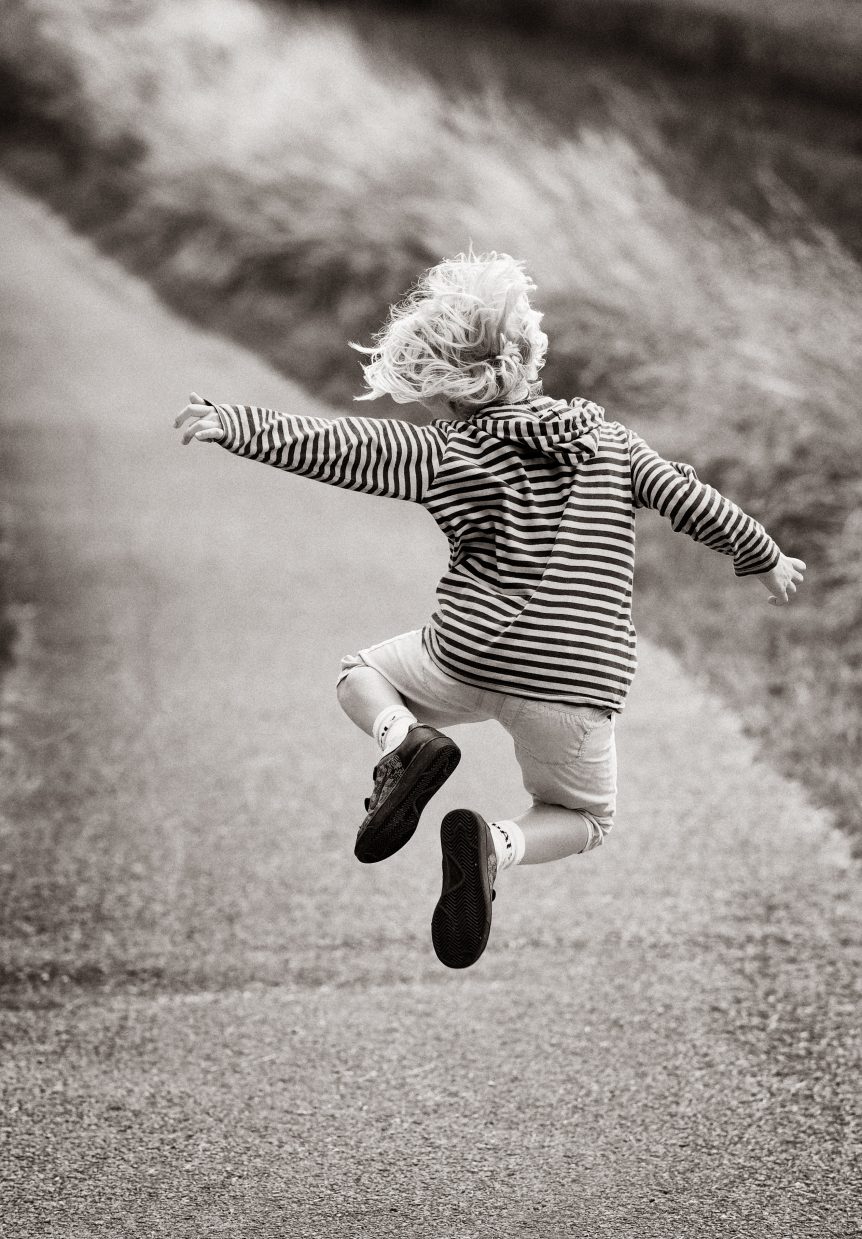 Striking a deal to get the shot

Alex wasn’t interested in having his photo taken, so I needed a strategy to encourage him to cooperate. Happily, one of the tricks up my sleeve worked a treat, enabling me to get him involved and even capture this joyful portrait.

I still don’t know what the official term for this leaping heal-kick is. I’ve always called it a ‘Dick Van Dyke’ as, along with his decidedly dubious Cockney accent, this is what I most remember him for. When I describe it to people this way, they seem to understand what I’m talking about, so that’s what I’m calling it. Anyway.

Striking a deal to get Alex onboard

Alex was ten years’ old at the time of this shoot, and had decided he didn’t want to be photographed. This is quite common with families, as kids push back, challenge authority and assert their own preferences and demands. At the same time, however, I’m being commissioned to capture family portraits, and I need all the children to participate and cooperate.

So I struck a deal with Alex, using a trick I often try when kids don’t want to be in the photos. I agreed he could use my camera to take pictures of the rest of his family provided that – periodically – I could get a shot of him that I wanted. He decided this was a fair exchange, and our little bit of bargaining worked beautifully all afternoon.

This leaping heal-kick was the final shot I asked of him. We were heading back to the studio at the end of the shoot when I noticed this path bend away into the distance. I thought it would make a nice location, and visualised the energy and motion of a heel-kick as the perfect pose.

I spent quite a while showing him how to do it, so I was quite out of breath by the time I backed up to take the shot! But it was worth it – I couldn’t have wished for more. The light, the hair, the hands and the heals all came together at the right millisecond, framed perfectly by a set of appealing shapes from the road and the verge. Alex got it right first time, and I hit the shutter just once to capture the shot. It’s always worth trying these things because sometimes you just get lucky!

It was a bright day with hazy skies and a beautiful, bright light.

I set my aperture to f/5. While I wanted to separate Alex from the background by having it dissolve out of focus behind him, I also couldn’t control exactly where he’d make the leap, and wanted to ensure he would be sharp in the final shot. F/5 on a 70-200mm lens gave me the right compromise.

At the same time, I needed a fast shutter speed, as I wanted to freeze Alex in midair. A slower shutter speed would result in blur as Alex moved across the frame while the shutter was open. So I opted for 1/600th of a second, raising my ISO to 500 to ensure a correct exposure.

Lastly, I converted the image to black and white in post-production. As you can see from the image, Alex has some details on his socks, and stripes on his top. These are brightly coloured and can distract your eye. I wanted the shot to be all about the mood and joy of the heel-kick and a black and white conversion achieved this.

All-in-all, this shot was a great outcome for someone who decided he didn’t want to be photographed at all. You might even say it was supercalifragilisticexpialidocious!