Getting Kids To Smile

Asking for smiles from young subjects doesn’t work. Instead, you need to set the right atmosphere, tune into the child’s personality and interact with them.

What happens when you tell a kid to smile for a photograph? At best they pull the corners of their mouth upwards in a pseudo-grin. At worst they find the whole exercise boring and refuse to comply. Equally, if you try and force the fun, it can be just as awkward.

I have two kids of my own (in their late teens now), so I have a good understanding of what children are into at different stages of development. I’ve always loved joking and messing around, and this means I naturally bring a lot of energy and playfulness to my shoots. This is true to such an extent that’s it’s normally the serious and moody shots that I struggle to capture most – we’re too busy laughing!

Humans pick up on the signals others send subconsciously, and if you don’t like working with children, they’ll sense it. You have to be genuine with kids to get reactions like this one. And you need to ensure their parents are helping to set the right mood, rather than undermining it. Here’s my approach.

Set the right atmosphere from the start

If the parents are fussing or being critical, you’ll struggle to get the best from their children. Tense parents tend to ‘peck’ at their children, saying things like “Stop pulling that face”, “Do what the photographer says or I’ll (insert threat here)” or – my personal favourite – “We’ve paid a lot for this; don’t ruin it”.

Instead, create the right atmosphere by laying a little groundwork before you start the shoot. Ask Mum and Dad to pass on responsibility for worrying about the photos to you. Tell them if they don’t love the images you create, they can come back for free another time. Let them know they are responsible for the safety of their child, but for everything else, you’re in control. Give them permission to relax.

Then, tune in to the personality of the child. Are they confident and independent? Or are they shy and perhaps a little wary of you? Spend time getting to know him or her, to break down any barriers and find out what their interests are. Focus on building trust and rapport first. Once that is in place, everything else becomes easier, and you can start working to create the kind of expressions you want to capture.

For this portrait I began by chatting with the boys about the absurdities of life and school. Then I let the topics flow on naturally from there, making up jokes, gently teasing the trio and laughing along with them. I don’t know why, but it seems to be getting easier to think up funny things as I get older.

On a separate topic, this image is also a great example of the frame within a frame technique. The edges of an image create an outer frame, and by using visual elements from within your scene you can create an additional frame around your subject. It’s a compositional tool that helps draw the viewer’s eye to your subjects, and keep it there.

Here, the square wooden door behind the three boys surrounds the boys, creating a first frame. I was lying on the ground to take the photo, and my low camera angle has introduced blurred grass in the foreground. This creates a second, partial frame across the bottom edge of the portrait.

The most perfect composition won’t matter, however, if your subject doesn’t look like they want to be there. If you want to work with kids, work on your ability to relate to them first and foremost. 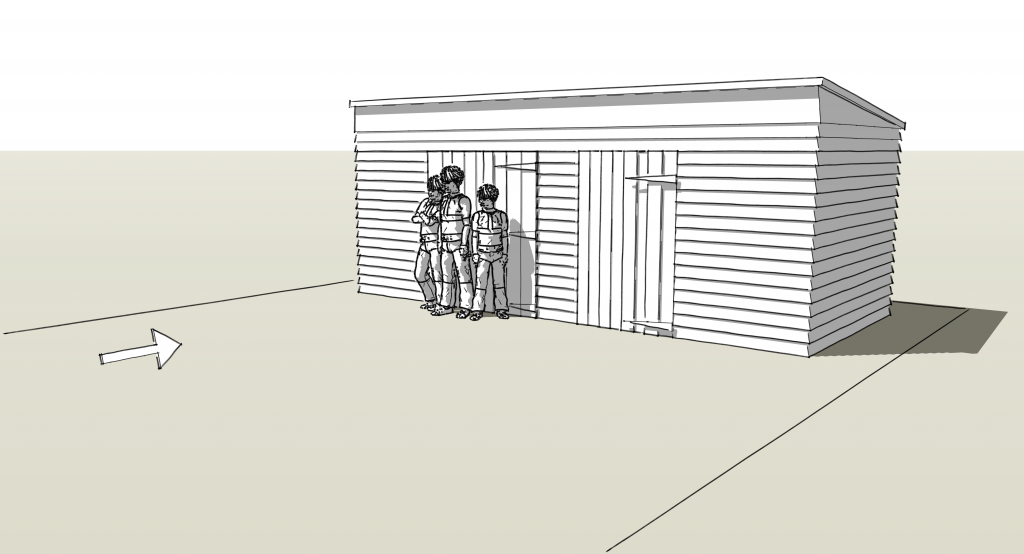