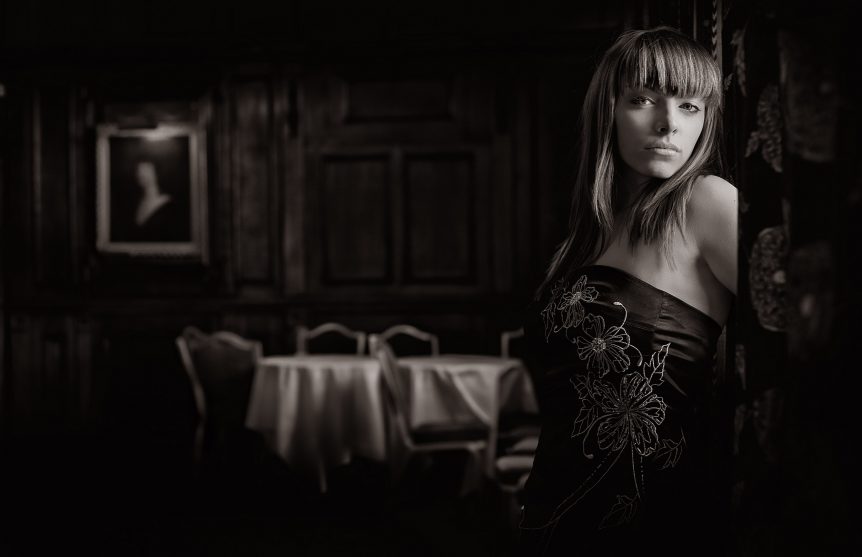 Intrigue In The Abbey

Want your subject to shine, and your background to fade into the shadows? Make it happen by positioning your subject in a brighter patch of light and exposing for his or her skin.

This portrait was taken while I was waiting to photograph a prom in an abbey. The room we were in was pleasant enough. However, as a portrait photographer I want your eyes to be drawn straight to my subject’s face, not what’s behind them. Lighting their face so it’s the brightest part of the scene is an effective way to achieve this.

I loved the sunlight coming in through the window of the room and drew the curtains tighter to see if I could create a more defined shaft of light. I knew that when exposing for the skin of a subject standing in this patch of light, the background would become underexposed, making it less prominent and distracting.

Indeed, although the background now looks dimly lit, it is still visible. This creates a nice narrative and suggests some kind of story or intrigue to the portrait.

I deliberately chose a wide, landscape view of the scene with negative space to the left (as we’re looking at it) so that the final image would feel more like a scene from a film than a portrait. I further emphasised this effect with a monochrome conversion in post-production, as this makes it reminiscent of a black and white movie which, to me, seemed more appropriate to the scene than colour.

I asked Kate to lean back with one arm on the window sill and then turn her face slightly towards the light outside. This created the beautiful Rembrandt-style lighting pattern you see on her face.

After your subject holds a pose or expression for more than a second or two, it can start to look less natural. My best tip for avoiding this is to work quickly! With her face angled towards the outdoors, I asked Kate to glance back to me so her eyes are looking into the camera and – ultimately – straight into your eyes as you view this portrait. I was ready to capture the shot as soon as she did this.

This was the image that won me the 2011/12 International Contemporary Portrait Photographer of the Year Award. However, given the chance to go back and change one thing, I’d tidy the chairs in the background up so that they were in their proper place around the table.