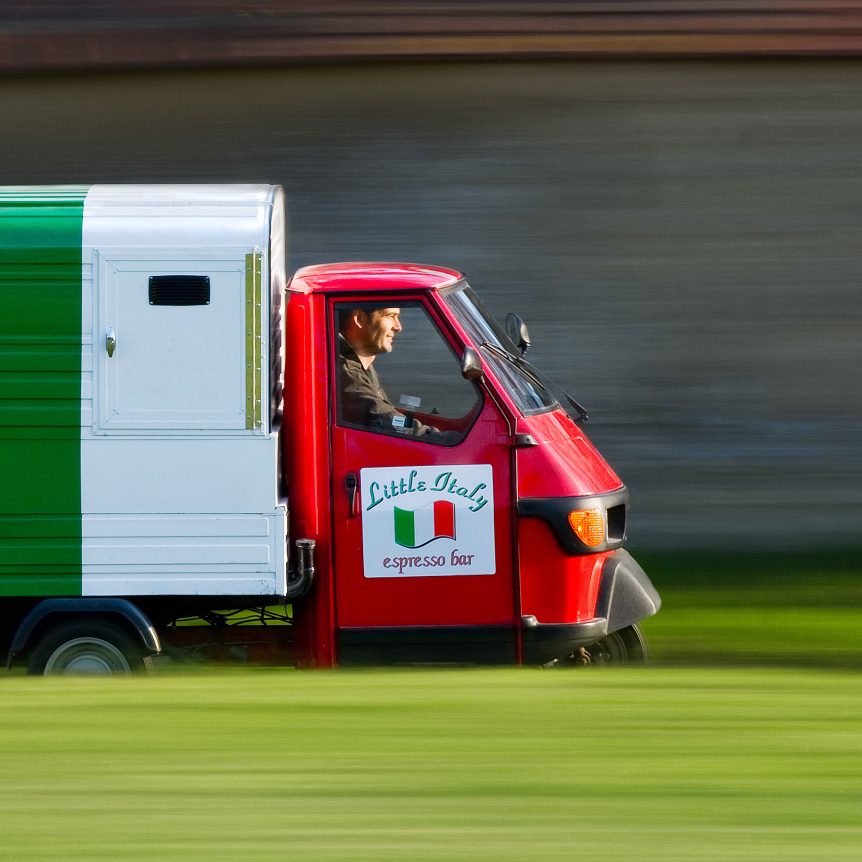 Whizzing out the frame in a Little Italy Van

What happens when a commercial client challenges you to create an unusual portrait in a place where the light isn’t quite right? You get creative, work out what the final image should look like, then find out a way to make it happen, of course…

This was a commercial shoot for Little Italy, an espresso bar a few hundred yards down the street from us in Haddenham, Buckinghamshire. In lieu of payment, Little Italy display my portraits in their customer areas. Their typical client is also my ideal target client, so this arrangement is mutually beneficial: they get free photography, while my work gets exposure to locals with disposable income.

This characterful van barely goes faster than walking pace, but we wanted to create a shot with energy and movement. It was destined to go in a big frame on the walls of the bar, where it looked incredibly striking once displayed.

The right location but the wrong light

I found a location that was ideal with a non-distracting wall in the background and grass in the foreground. I wanted the van to be travelling from left to right across the frame, as this is the direction that people in English-speaking culture are taught to read. Matching this left to right flow across the image makes the whole thing more harmonious; it feels that things are how they should be.

The whole scenario reminded me of cartoons where the artist has drawn a puff of cloud and some zoom lines behind a car or character that is moving at high speed. That’s the kind of feeling I wanted to evoke here. And as characters generally travel left to right in comics (to lead the reader’s eye to the next frame), this was another reason why I wanted the van travelling in this direction. I also wanted the van nearer to the edge of the right-hand-side of the image to give the sense that the van was going so fast it was going to zoom right out of the frame. This adds a little tension to the image (see the NOSE ROOM rule).

However, the light was falling in the wrong direction. The sun was shining from the left of the scene, which would put Simon, the driver, in shade. I needed light on his face to draw your eye towards him – he is the subject of the portrait, after all. So I asked Simon to drive towards the sun, meaning he was travelling right to left. I decided I would flip the image in post-production to make the van travel in the direction I wanted, which meant I would need to flip the van’s logo a second time to ensure it read correctly.

One image in two parts

I shot this knowing I was likely to blend two images into one composite later on. This meant I would have more options in post-processing: if you capture a shot like this all at once, you’re very limited if you change your mind on any element later on.

So I also captured frames of the bare wall while Simon was taking the van around the block ready for the next lap. These shots gave me a full background, which meant I could use any chunk of the wall in the final image. I used the same focal length, focus point and exposure settings, then mimicked the speed of the van as I panned so that the blur would be identical. This consistency made the Photoshop editing easy.

Simon did several loops around the green to provide multiple opportunities for me to capture the shot. I was lying on my stomach with my elbows propped on the ground to steady the camera. This helped me to keep the camera level as I panned in time with the van, at 1/25th of a second.

I wanted the van to be sharp, so I focused on that. It was bright out so I needed to use a low ISO and a small aperture (f/22) to allow such a slow shutter speed without letting too much light into the camera and overexposing the image. However, the front-to-back focus of using such a small aperture did mean there were lots of dust spots visible that needed editing out afterwards!

Although this is not your traditional portrait, it does highlight the need to be able to deal with client requests that stretch the boundaries of what you are comfortable shooting. With a bit of planning and thought, you can use your camera skills and knowledge of exposure to work out how best to capture a scene like this, delighting your client and ensuring they don’t need to bring in another photographer for just one shot.