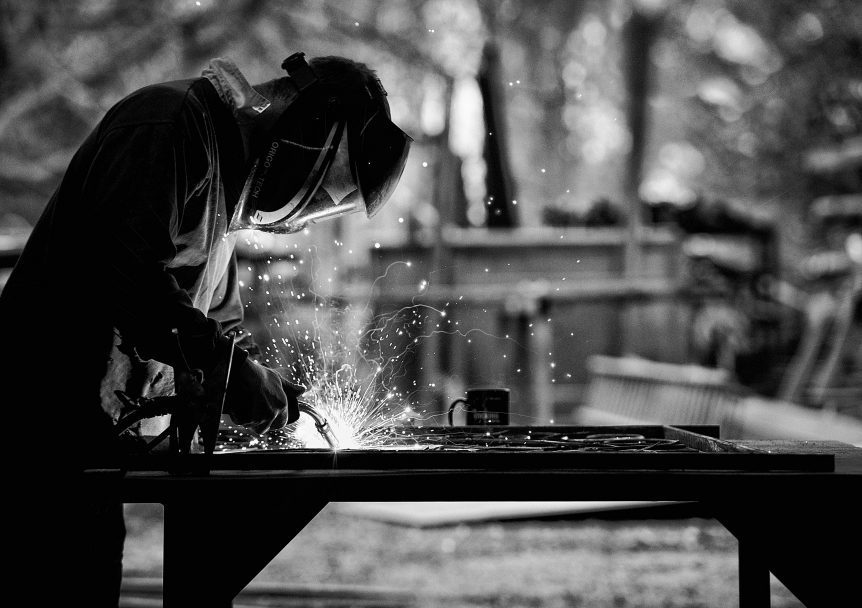 When shooting people carrying out their jobs, sometimes you have to go beyond your own job description to ensure a happy client…

This portrait was taken as part of a commercial commission from a forge. They create the most incredible work for very, very, very wealthy clients. I saw this welder working in the middle of the forge and I thought there might just be a shot in it…

I had been watching the welder work for a while, but he wasn’t wearing a face mask. I knew I would just get bad feedback about not following health and safety, so I waited until he had finished a task and then asked him to put his visor on.

This may not be in your job description as a photographer, but it’s worth being aware of when shooting at workplaces and commercial premises.

Imagine taking the most beautiful set of images and presenting them to your client, only to be told they are unusable. If your portraits capture people breaking health and safety, that’s likely to happen. A client who used these portraits would put themselves at risk of legal action at worst, and looking unprofessional at best.

To avoid this, discuss the health and safety aspects with the client before the shoot takes place, so you know what to look out for. There will usually be health and safety posters around the premises, too, which can add extra detail. But a lot of it involves common sense: does your portrait capture a potentially dangerous activity? If yes, then what safeguards are being employed to lower risk and prevent injury? Make sure these are in place before you start your shoot.

On the same note, watch that you aren’t introducing new risks to the workplace either. This could include distracting workers, wearing inappropriate clothing (loose fabric which could catch in machinery or open-toed shoes, for example) or not following the health and safety protocols for that environment yourself.

I took this during the day. What you see in the background is actually outside the shed this employee was working in, but the light of the arc welder is incredibly bright that it overpowers the daylight behind.

I set the exposure to just keep the arc from blowing out. If I overexposed it, I would have patches of the image that were pure white, with no detail in them. Then, I simply hoped that the rest of the image would render well enough to make it all work. Then, I shuffled around to change my viewpoint until the background framed the welder in a visually pleasing way.

The mug on the far side of the work bench was there the whole time, and I opted to keep it in the shot as it added some character.