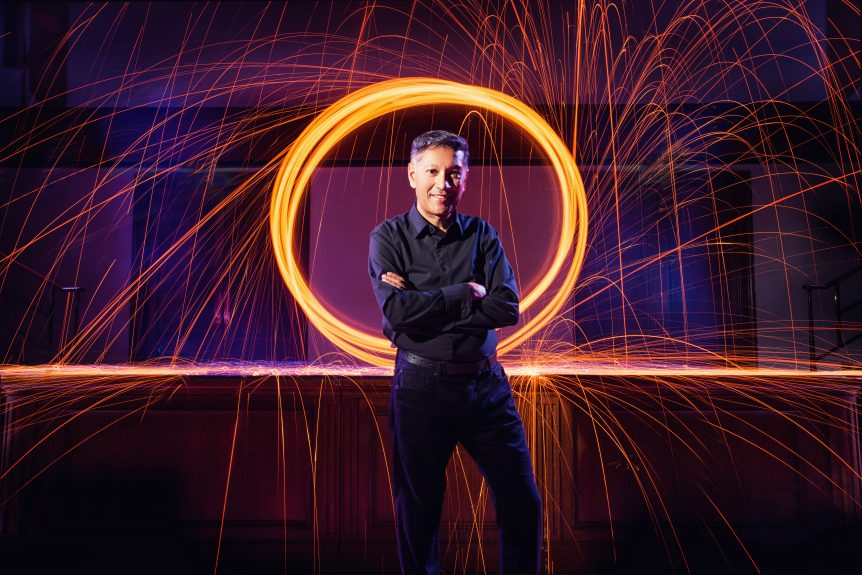 Lighting up an ancient lecture theatre for a science-themed portrait

This shot was about fire, camera and action, as part of a commercial commission to create a visually striking portrait of a chemistry lecturer.

The Royal Institution (RI) is an independent charity that promotes scientific understanding. They put on Christmas lectures every year and in 2016, the lecturer was Saiful Islam and the theme was energy.

Saiful is a Professor of Chemistry at Bath University, and I spent a day with him during which I captured about a dozen shots. This was my favourite from the final selection, and indeed, the one that is still used to promote the lecture in the RI’s back catalog.

My challenge was to create a series of portraits that flattered Saiful, intrigued the viewer and somehow communicated the energy theme.

This one took place in the main lecture theatre, in front of a bench that had been used for various science experiments and demonstrations for over 150 years.

A technician who was helping us on the day came up with the basis of this idea: to set alight iron filings inside a metal cage and swing it to create a circular light trail. Now, half of my job involves relaxing my subjects, and fast-moving fireballs are not normally conducive to this. However the Head of Demo agreed two things:

1. That the health and safety considerations had been assessed for risk and mitigations put in place (such as covering nearby soft furnishings with fireproof material).
2. He would be the one to swing the lit box behind the subject.

These two points would be irrelevant if our subject hadn’t been willing to go ahead, but luckily a career in combining different elements of the periodic table had given Saiful an open-minded attitude to controlled risk.

I’ve fitted this second speedlight with a blue gel. This adds interest to the scene thanks to the addition of the colour but also makes the orange fire trail stand out more. That’s because orange and blue are on opposite sides of the colour wheel, which means they each look more vibrant when used next to each other.

I set a long shutter speed (about 10 seconds), with both speed lights firing at the start of this time. Throughout the exposure, the Head of Demos spun the metal cage behind Saiful, which created the trail of light.

Saiful had to stand extremely still throughout the exposure (despite the sparks flying around behind him) to avoid the outline of his body blurring at the edges. As 10 seconds is a very long time to hold a camera without introducing any movement at all, I used a tripod to ensure I didn’t cause any blur from camera shake.

Unfortunately, despite our precautions, a spark did burn through the fireproof material onto one of the chairs. Happily though, all was forgiven when they saw this final image! 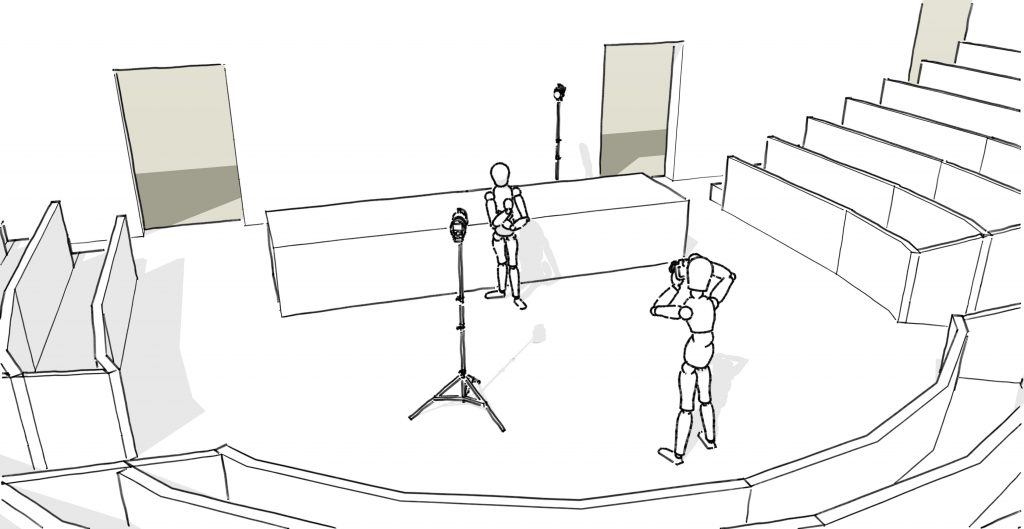