Shadows give your portraits a sense of depth and shape. Here’s how to achieve the ‘Rembrandt’ lighting pattern, and turn a grey background to almost black.

This portrait is all about controlling the tones across an image to create just the right mix of interest and sophistication. Here’s how you can do it.

I’ve positioned a large, hexagonal softbox to Mark’s right. It’s just far enough forward that a patch of light has formed a triangle on his left cheek, and a catchlight in his left eye. This lighting style is referred to as ‘Rembrandt lighting’, named after the famous painter, who lit many of his subjects in this way for his portraits.

The light’s intensity is strongest on Mark’s right side, nearer the light source. It then feathers gradually over the front of his face until it becomes dark shadow on Mark’s left. Shadowing gives a face shape and depth, and can either broaden or slim the face’s appearance, so it’s essential to control how and where the shadows fall.

I took this photograph in our old, much smaller studio. It had white walls and a white ceiling, which had the occasional benefit of bouncing a little light around. This replicated the effect of a reflector, or a fill-in light on a very low setting. Of course, you learn to adapt to the space you’re shooting in, so I took advantage of this feature to reduce contrast in my portraits, as as happened here.

The background behind Mark is actually grey paper, but as there’s so little light reaching it, it appears almost black. However, you can see that’s Mark’s left ear and side of his head are silhouetted against the backdrop. That’s because there’s just enough light from the softbox falling on it that it’s slightly more illuminated than the dark side of Mark, resulting in not just a silhouette but also separation.

I love using a narrow tonal range to create an image, so you’ll notice that I’ve matched the dark grey background to Mark’s grey suit and black shirt. Mark’s face is the lightest part of the shot, so our eye is immediately drawn towards it (always my goal in portraiture).

I’ve cropped into Mark’s hairline to place his eyes on the top line according to the rule of thirds. This rule provides a guide to the most impactful place with a frame to place key elements. To understand it, imagine two equally spaced horizontally lines that split the image into thirds, overlaid with two equally spaced vertically lines that split the image the other way, giving nine identical boxes. Placing a key element such as your subject’s face or eyes on one of the lines is a big compositional tick. Placing that element on one of the four intersections (where the lines cross) is even better.

With all these complementary tones and compositional rule-following, the image was getting a little too harmonious, so I’ve cropped the shot with Mark’s body facing towards the left edge of the frame. This introduces a little visual tension, helping to keep everything a little more interesting. The result is a simple, one-light studio shot with low key tones and lots of sophistication. 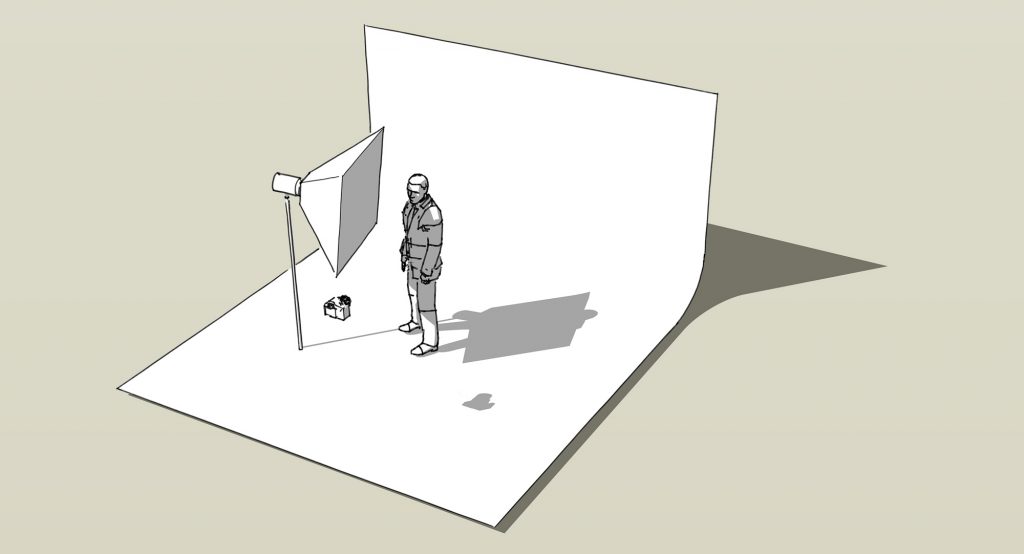