Sometimes photographing multiple clients at once is pretty straightforward. If the people in front of your camera have similar face shapes, similar heights and similar skin tones, then there’s fewer challenges to consider when creating flattering portraits of them together.

But sometimes there’s a height difference that you want to minimise or exaggerate. Your clients might have different face shapes that require different lighting patterns to flatter their features. Or they could have different skin tones that you need to balance the light for. In this instance, Matt has dark skin tones while Rob has very pale skin tones. How could I achieve a correct, flattering exposure, all in one shot (and with no Photoshop trickery!)?

Use light for dimensionality in your portraits

You may have heard that lighting is the foremost consideration in photography, which is true. Why does it matter so much, though? It’s because photographs are two-dimensional images. Areas of light and dark tones in pictures give a sense of shape and depth, a perceived third dimension. That’s why I hate flat studio lighting, with no shadows anywhere – it looks shapeless, boring and not true to how we see things in the real world.

With portraits of subjects with dark skin, this sense of shape on a person’s face is mainly created based on the location of the highlights on their skin. Conversely, with pale skin, the sense of shape is created mainly by the shadows. So we want to see highlights on Matt to add dimensionality, but to shape Rob’s face we need to use shadow. How can we ensure sufficient light on both Matt and Rob, without under- or overexposing either of them, or ending up with flat lighting?

Understanding the relationship between light and distance

The answer lies in the fun-sounding ‘inverse square law’, which determines how the strength of the light increases or decreases as a person moves closer or further away from the light source. If you’re shooting outdoors using natural light, there’s little difference in moving your subject closer to the sun. That big ball of fire is nearly 150 million km away, and placing one of your subjects a foot or two closer won’t change anything.

But in the studio your light source is a lot closer, and that means the light diminishes at a much faster rate when your subject gets further away from it. Using a bare flash bulb, moving a subject who was two feet away from the light until they are four feet away will mean they will have just a quarter of the amount of light falling on them than before.

If you are using natural light though a window that is shaded from direct sunlight (or which has a net across it to diffuse the sun), your light emitter is now that window, rather than the distant sun. This means that the harsher rate of light fall-off applies. It’s why good wedding photographers place the groom (typically wearing a dark suit) closer to the window, with the bride (typically in a white dress) furthest away.

Testing out the theory

In our main example, I put all this theory into practice. Matt has dark skin, so I’ve placed him nearest the light, while Rob with his paler skin is just a little further away. Because I’m using studio flash, there’s a lot less light reaching Rob than Matt. This reduces the contrast between their skin tones, making it easier to achieve a correctly exposed image, while still shaping their faces using plenty of highlights (on Matt) and shadows (on Rob). 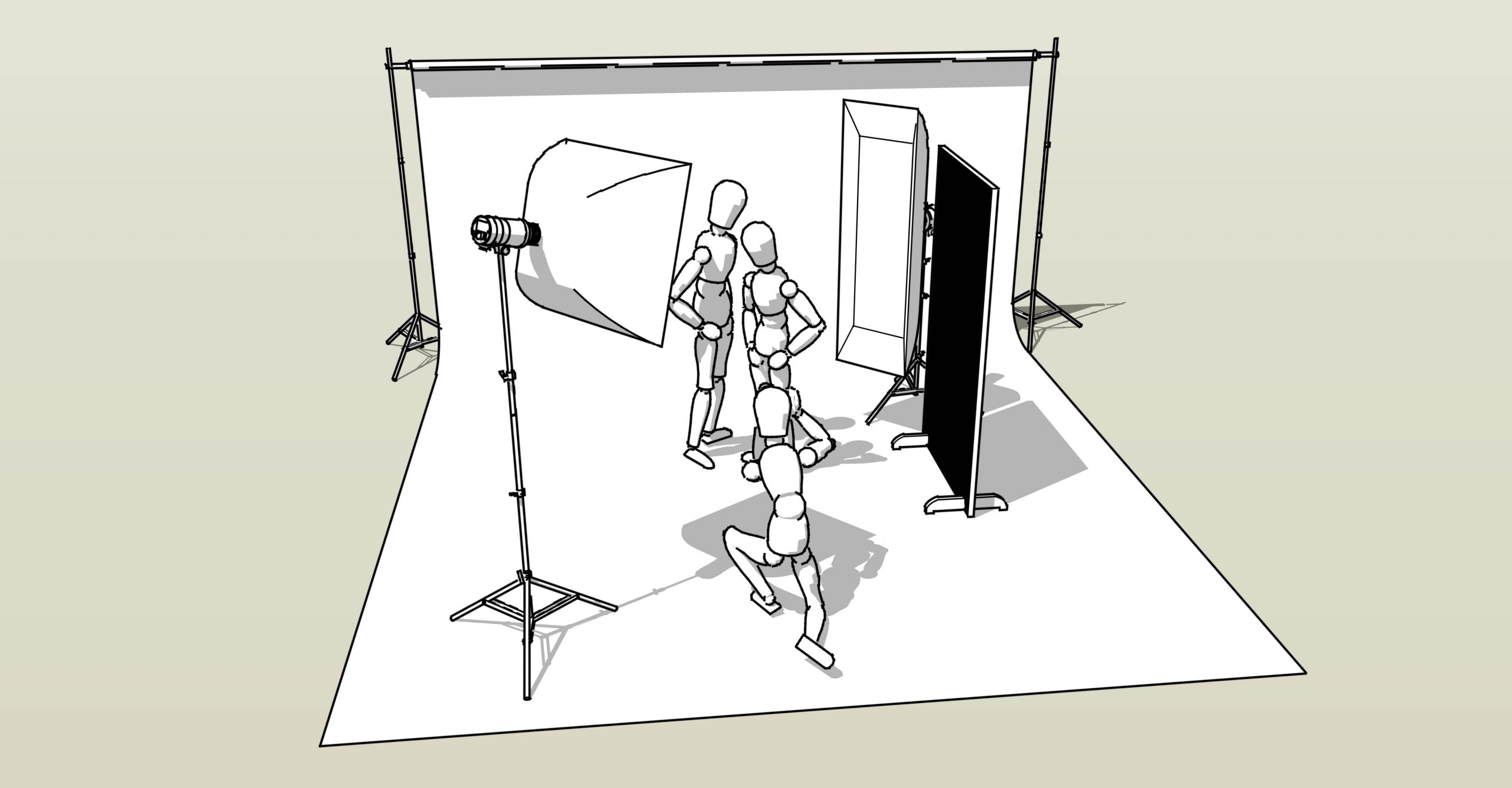