Sometimes you’re aiming for a specific look, but your subject arrives wearing something that doesn’t align with your vision. Here, I had been planning an image with dark tones, but my model was wearing white.

I’m a fan of portraits with a narrow tonal range, as they look more subtle and sophisticated (to my eye, anyway). They also enable me to bring the viewer’s attention to the face more easily, as I light faces to be the brightest part of the image.

These two images were shot as part of a campaign for a hair salon, so it was also essential that the hair was well lit and looked great throughout.

A white shirt but a low key portrait

The model for this shoot, Rhys, was wearing a white shirt, but we were aiming for a low key image. I knew I didn’t want the whole of the garment to be visible, because its light tones would draw your eye and take away from the low-key effect I was trying to achieve.

However, Rhys didn’t have a jacket with him. We were able to borrow one from another model who was in the studio that day, but unfortunately, it was way too small. Rhys could barely bend his arms at all, which limited our posing options for fear of ripping the jacket!

Nevertheless, Rhys looks great in these two portraits, with his hands loose by his sides and then tucked in his pockets.

Although the white shirt is still visible, it’s well-contained and I like how the pale tones run in a line, from Rhys’ face to his belt buckle.

Both of these portraits were shot with one light (to the left of the image as we’re looking at it) and one reflector (on the right). You can just see the impact of the reflector on the right of Rhys’ neck, where the bounced light lifts the shadows and adds definition. 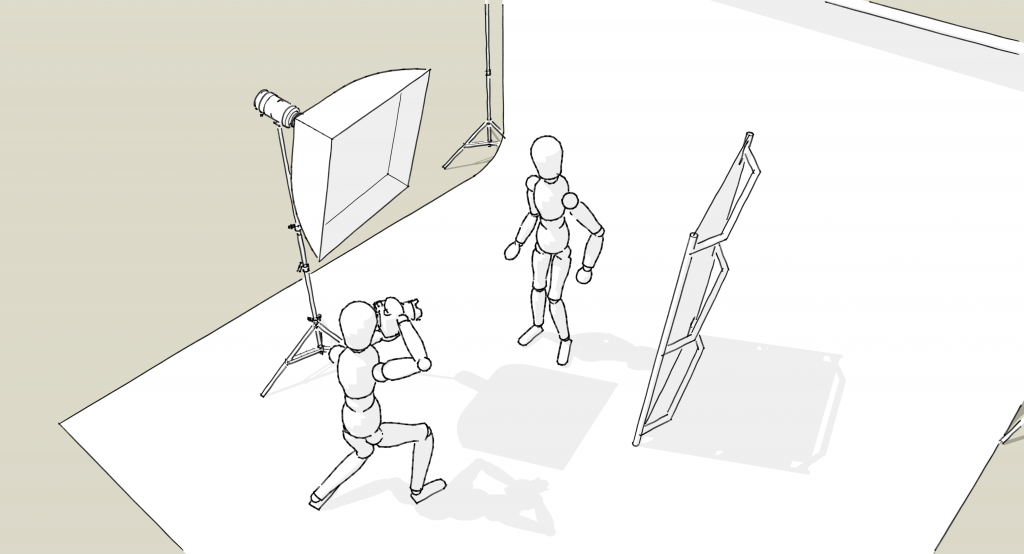