Action gymnast portrait in the studio

There’s specific studio lighting know-how you’ll need if you want to try your hand at catching an athlete mid-air with an arc of powder around them. Read on to find out what you need to do. Oh, and this shot comes with a warning, too…

Isibel’s family came in for a regular shoot together, but with one additional request. Isibel asked if she could be photographed doing her favourite pastime: gymnastics.

We’d agreed to this in advance, so she brought her tumble mat with her and set it up in the studio after we’d captured all the family portraits. Her mum suggested we use gymnast’s chalk to add drama and movement, but we weren’t sure if this would be unhealthy to breathe in once airbourne, so we used flour instead.

I asked Isibel to hold the flour in her hands and throw it as she jumped. When doing this type of shot with professional dancers, you have a lot more control over the timing of the jump and the movement of the flour. When kids are involved, however, it’s more important to keep it fun, with lots of laughter and no pressure.

This means it took a few attempts (and a lot of flour!) to capture this shot. The flour you can see below Isibel was fallen flour from previous attempts, picked up by her feet. This wasn’t intentional but I do think it adds to the image!

Hold back the power

Normally, studio flash fires just once and has to fire exactly when the camera’s shutter is fully open. It’s only at this point that the whole of the sensor is visible at once, allowing the flash-lit scene to be rendered evenly across the frame.

Otherwise, black strips of underexposed areas will appear across your images, caused by the shutter curtains blocking the light from reaching the sensor as they travel across it. On most DSLR cameras, the shutter is fully open at a shutter speed somewhere between 1/160sec and 1/250sec. Check your camera’s manual for the sync speed – this is the point at which the manufacturer has programmed the electronics to reliably trigger the flash while the shutter is fully open.

The pulse of your studio light is much faster, usually starting around 1/1000sec. This is perfect for freezing motion, like a jumping Isibel mid-air. But if you increase the flash power, that pulse gets slightly longer. The longer pulse can result in visible movement of your subject during the duration of the flash, giving a blurred ‘ghosting’ effect in the image. To avoid this, you need to make sure your flash heads are set to fire as fast as possible. One way to do this is to lower the power – we found that around half power worked well, combined with the ‘freeze’ setting on my Profoto units.

This setting pumps more power into the tube and then compresses it, so that the flash pulses as quickly as possible. This helps to freeze motion a little more effectively. The tradeoff is that there can be slight colour shifts, though I’m not sure why!

You want the flash-lit scene to be the only thing picked up by the camera’s sensor. But if the flash power is too low, you’ll have to use a higher ISO and/or open up the aperture to ensure a good exposure. And if you have a higher ISO or a wider aperture, you run the risk of the sensor recording the ambient studio light or modelling light. If these sources of light bounce off your subject and reach the sensor, then the shutter speed of 1/180sec (or thereabouts) will become apparent, as they will light your subject as she moves across the frame, resulting in ghosting.

But – as mentioned above – if you increase the flash power to avoid using a high ISO or wide aperture, then the pulse of the light is too long and once again you get ghosting. Phew – lots to think about! A little trial and error helps get the right flash setting and exposure combination.

You could also achieve the same effect with High Speed Sync (HSS), although I find it harder to tune properly. In HSS, the flash fires repeatedly as the shutter moves across the sensor at high speed. The sensor is never fully visible at once because the first and second shutter curtains are chasing each other almost instantaneously across the face of the sensor, to expose it for just the smallest fraction of second. But as each portion of the sensor becomes visible, the flash fires again to light the scene for that segment of the sensor.

As a result, the scene should look evenly lit across the whole frame, despite the many pulses of light. However, I find it more effective to use the traditional syncing method described above.

A secondary consideration when using multiple studio lights for a shot like this is ensuring all flash heads fire at exactly the same fraction of a second. To do this, you need to trigger them all at once from a single source. Some studios are set up so that the camera triggers the first flash, then the other flash sense that light (using the ‘magic eye’ setting) and they fire a millisecond later. Again, this would result in ghosting as your subject will move between the initial and secondary pulses of light in an action shot like this one. Instead, use cable or – preferably – radio triggers (which are much more affordable now).

A word of warning

Thinking of giving this type of shot a try? One warning. On the day of the shoot we covered up as much of the studio as we could and even taped over joins to try to keep the flour out. It didn’t work. Even now – several months and many cleans later – I will move something in the studio and a cloud of flour will float up. The stuff gets absolutely everywhere. Worth it, though, right? 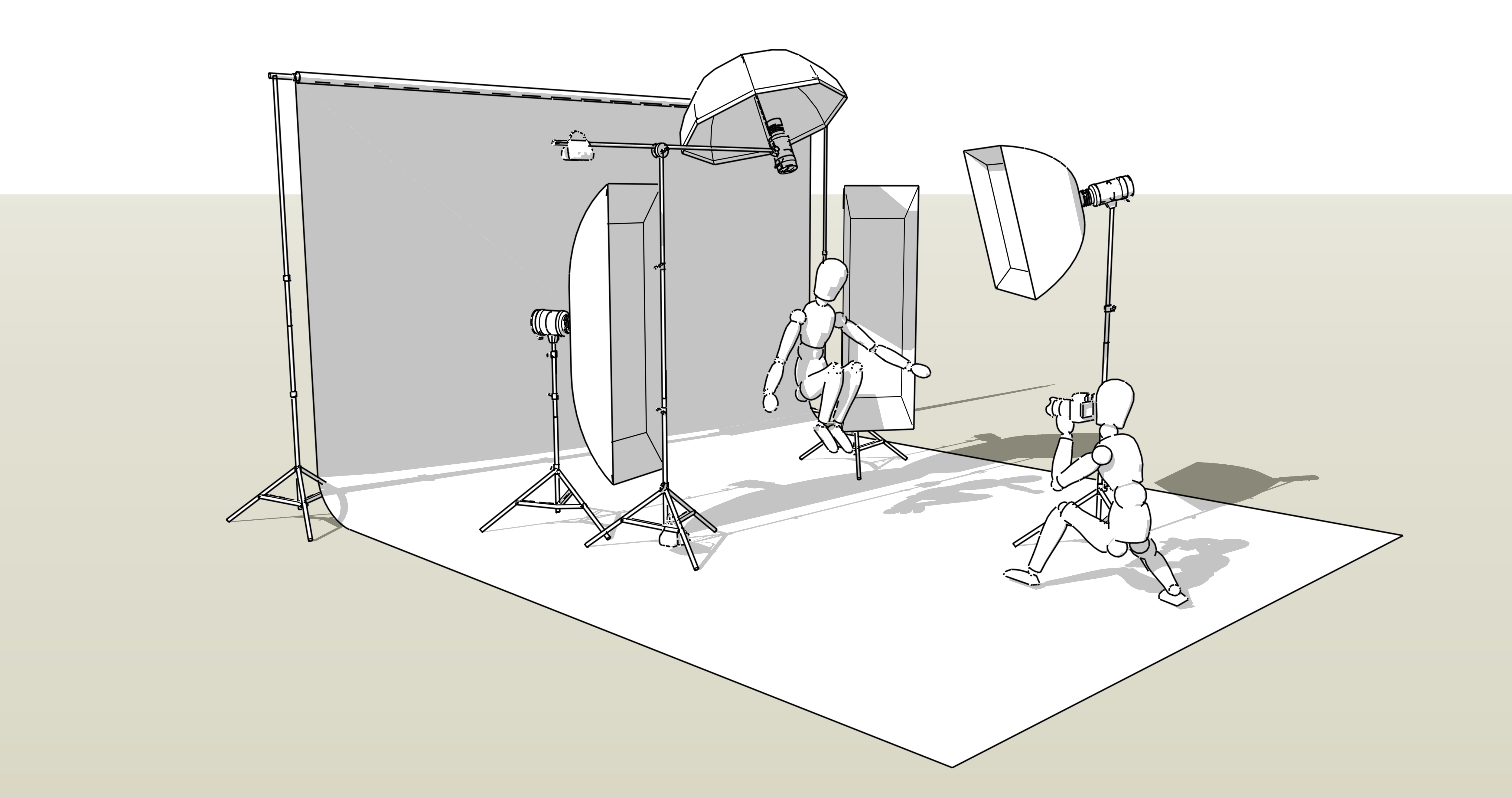