The cover of Mastering Portrait Photography features a portrait of young Ben (who is now a professional rower!). Here’s the story behind our most famous image.

You don’t compliment a writer on their keyboard, but so many times good photographers are told ‘you must have a good camera’. Well this was taken on a 6MP Nikon D100, yet it made the cover of our international reference guide, Mastering Portrait Photography. Here’s the story behind the image.

From little acorns to mighty oaks

Ben was just six or seven years old when we took this image. In those days I used to take a lighting rig to people’s home. Of course, our studio is a little more sophisticated these days…

Back during this time, we had shoe-horned everything (including a six-foot octagonal soft box) into the family’s study. I clipped a piece of black velvet up against the window as a background. Black velvet is the ultimate material for an inky black background as almost no light is reflected from it at all.

Young Ben wouldn’t sit still and wanted to pull silly faces the whole time – just as any six-year old boy would. At some point I spotted that his sister had been playing with his toy car, and I pointed this out to him: “Look, Ben, your sister has left your car on the floor!”.

I pointed to the ground and Ben reacted precisely as I had hoped. He became instantly serious and looked down to where I was pointing. I hit the shutter button and the photo you see is the result.

The Octa light is huge, so it looks more like windowlight than studio light. This was taken in a small space, so there’s plenty of light bouncing around the room. This softens the contrast, by lightening the shadows slightly.

The Nikon D100 is a camera that no serious pro would consider these days. But it’s worth pointing out that with a good lens and careful focus (to make sure the detail you have is really sharp), your sensor’s megapixels don’t matter. This shot was picked out of hundreds of others (including from better, newer cameras) to feature on the cover of our book.

Ben is now part of the Team GB rowing squad. And at six foot something, he towered over all of us at the book launch of Mastering Portrait Photography! 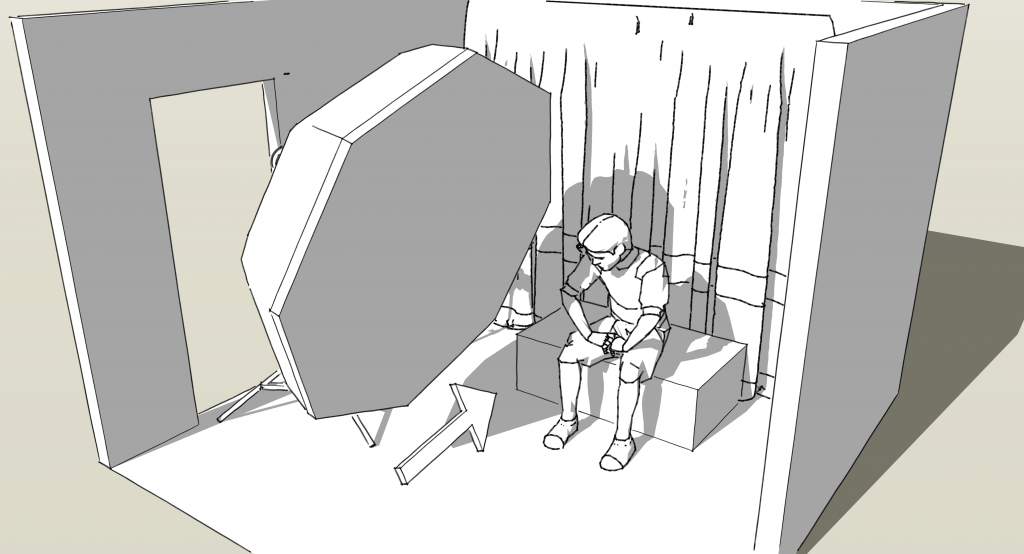 There really was only just enough room for Ben, me and a 6ft Octa! The background was some black velvet I clipped across the curtain rail. Simples.