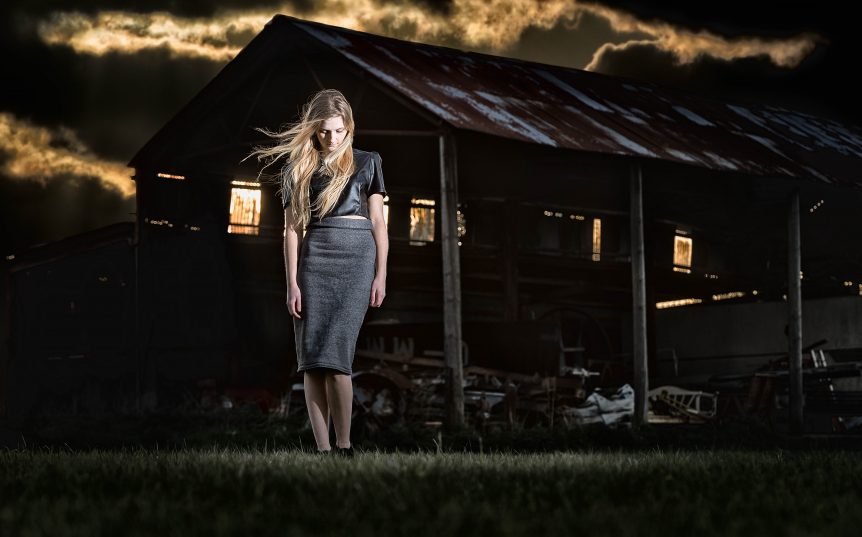 Stylised portraits can be the most fun to create, especially if you enjoy overcoming technical challenges. For this shot, I needed to make a bright sky look like night-time, and match the model’s pose to the mood of the set-up.

This is one of the trickiest images from our book, Mastering Portrait Photography. It was shot for an old friend of the studio who wanted to create some ‘horror-novel-inspired-images’ for a project for her fashion degree.

I knew the location in advance as it’s an old barn owned by a neighbour. It’s important you don’t just go and shoot on land you know nothing about without permission, especially once you turn pro. Firstly it’s trespassing, and secondly you don’t know for sure whether it’s safe.

It was quite a bright evening with the sun just setting. If you look at the leftmost window in the background you can see the bright spot showing the sun going down.

My challenge was to underexpose the shot as much as I could get away with and still be able to light Sophie with nothing more than a speedlight.

I placed the speedlight on a tripod to the right of Sophie (as we’re looking at it). I didn’t use a modifier such as a soft box because I didn’t want to dilute the light at all; I needed every possible particle of light that I could get on her to overpower the daylight. As you can see from Sophie’s hair it was also pretty windy that day, and a soft box would have been blown around like a sail!

The speedlight is positioned just outside the frame. The further away the light source, the more power it loses, so proximity was key, but I couldn’t have it so close that it would appear in the picture.

I asked Sophie to walk slowly towards me, while imagining she was looking for something small and hard to spot in the grass, such as an earring in the grass. This meant she would have her head down, her hair blowing in the breeze, and a steady pace as she came nearer.

I lay in the grass to get a very low perspective. This adds drama and also reduces the amount of lit grass visible to the camera. If I was standing up, you’d see the large pool of light on the grass from the speedlight, but because of my angle we can only see a thin strip of light instead.

With all the technical set-up covered, it was just a matter of shooting a number of frames, trying to capture her foot while it was in an optimal position. This was my favourite.