Sometimes you’ve got loads of light sources, stuff everywhere and very little time: this is the world of environmental portraits, & here’s my approach to them.

Belmond Le Manoir aux Quat’Saisons (known locally as just ‘Le Manoir’) is a hotel and restaurant in Oxford that’s owned by French chef Raymond Blanc. It’s a stunning venue, and I photograph a lot of weddings there. During one shoot, the bride and groom asked for a shot of the Executive Sous Chef, a chap called Rhodri.

I headed into the kitchens with the desire to create something dramatic, but knowing I had very little time to do so. Here’s how I approached it.

There were three different light sources in this scene. Firstly, the overhead fluorescent strips in the ceiling. Secondly, hot lights on the kitchen pass behind Rhodri and just in front of him (spilling the orange glow on his arms). Thirdly, I’m using two portable flash units (speedlights), triggered by radio. That’s a lot of lighting to manage at once!

I set up my speed lights first, positioning them in the same places as I often use for the main light and a fill light in my studio. One is on the left of the image (as we’re looking at it), and slightly in front of Rhodri. It’s as high up as I could get it using nearby flat surfaces I could balance the unit on – just high enough to get a catchlight in his eyes at the 9 o’clock position.

The second light is behind Rhodri and to the right. It’s lighting the side of his ear, neck and uniform sleeve, adding a little edge and drama to the shot.

I set the exposure on the camera so that the ambient light would look moody, but still be sufficient to show up some background details. I then set the power on the speedlights so that they would light Rhodri’s face sufficiently for it to be correctly exposed under those camera settings.

Lastly, I chose where I would be standing with my camera and decided where to place Rhodri. There were a bunch of background lines around him and I wanted to use these as ‘lead-in lines’. Lead-in lines are compositional elements that guide the viewer’s eyes around a photograph.

The hot pass to the right (as we’re looking at it) of Rhodri, the horizontal gleam of light above his left shoulder, the diagonal edge of the metallic unit by his left elbow – all these are lead-in lines. They provide a visual path that leads towards Rhodri, constantly drawing your eye back to him.

I asked Rhodri to cross his arms and look towards me, and I took the shot from one of my favourite angles – level with my subject’s neck and shoulders.

All-in-all, it’s an authoritative portrait of a chef in his home ground. 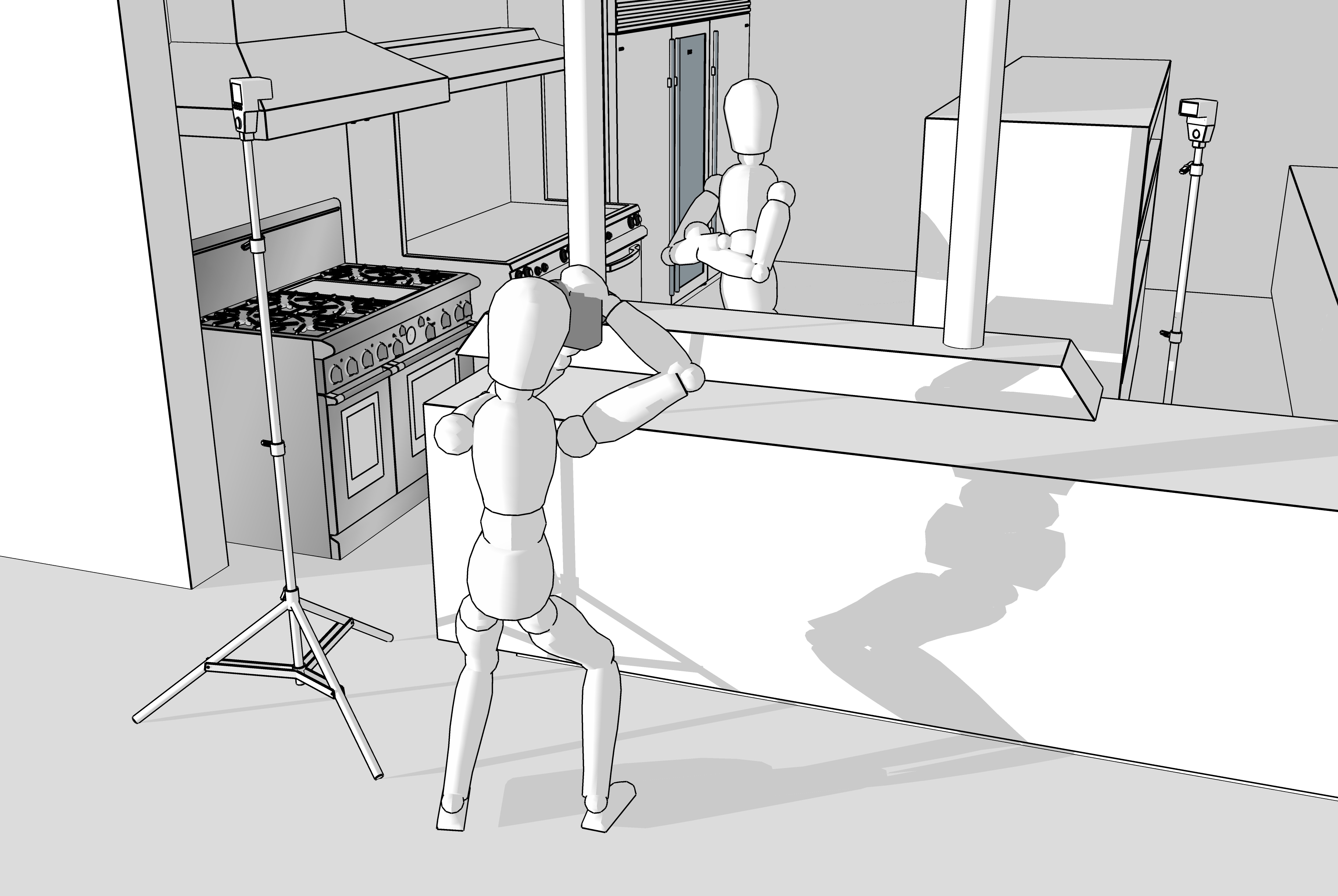