Using a low camera angle to make your subject the ‘hero’ in your portraits, and underexposing a bright sky for a more moody and atmospheric background.

When shooting on location, I look to re-create the lighting patterns and posing shapes I work with in the studio. Here, I positioned two portable flash heads in the same way I’d position lights back in the studio when creating a ‘hero’ shot.

I’ve arranged the stances of Kieran, Tom and Evan to give symmetry to the image, while inferring a triangular shape with the position of their faces (imagine drawing a line between each pair of eyes to see the triangle). This is more aesthetically satisfying while also stopping group shots from looking like a police line-up.

Make your subject the hero with a low camera angle

Photographing someone from above eye level can be incredibly flattering. If your subject is looking up towards your camera, their eyes will be open to their fullest, which looks attractive. However, it’s worth being aware of the power balance that your angle is implying. Shooting from above eye level conveys vulnerability, weakness and submission. It’s an angle I rarely use, as these aren’t attributes most people want to see in their portraits!

Instead, a low angle infers power and strength on your subject(s) as the viewer is ‘looking up’ at them. Have a look at the leading characters on film posters; they are almost always photographed from low down. I aim to capture subjects in the way that they want to be perceived, so that’s why the majority of my work is shot from my subjects’ eye level or lower.

That’s what I’ve done here, to make the three boys the ‘heroes’ of the shot: strong, confident and in control. Their expressions match the mood of the shot: these boys want to be taken seriously, like the footballers they aspire to.

I’m lying on my stomach in the grass to get as low an angle as possible. This has also shifted what we can see behind Kieran, Tom and Evan from mainly the treeline to mainly the sky. The lighter tones of the sky provide greater contrast, making the boys stand out more.

If I had exposed for the sky, it would have been recorded as a bright, plain background. Instead, I have deliberately underexposed it, to make it dark, broody and atmospheric. This adds to the mood of the shot; serious, not frivolous.

To successfully underexpose the sky, you need to overpower the ambient daylight with flash. I have one portable flash positioned at 45 degrees to left of the camera, and another to the right (as we’re looking at it) of the boys. The first flash is the main source of illumination, while the second throws a sharper quality of light across the side of the boys’ faces and necks. This second flash is at 90 degrees to the camera, and arranged so that its light reaches all three of my subjects.

We didn’t want the football kits to look pristine and unused – we were capturing three active and committed footballers, after all. Luckily, Kieran, Tom and Evan gleefully agreed to roll around in the mud beforehand to mimic that ‘just played’ aesthetic. This portrait of them will serve as a lasting reminder to their parents of all the washing that came with their children’s hobby. 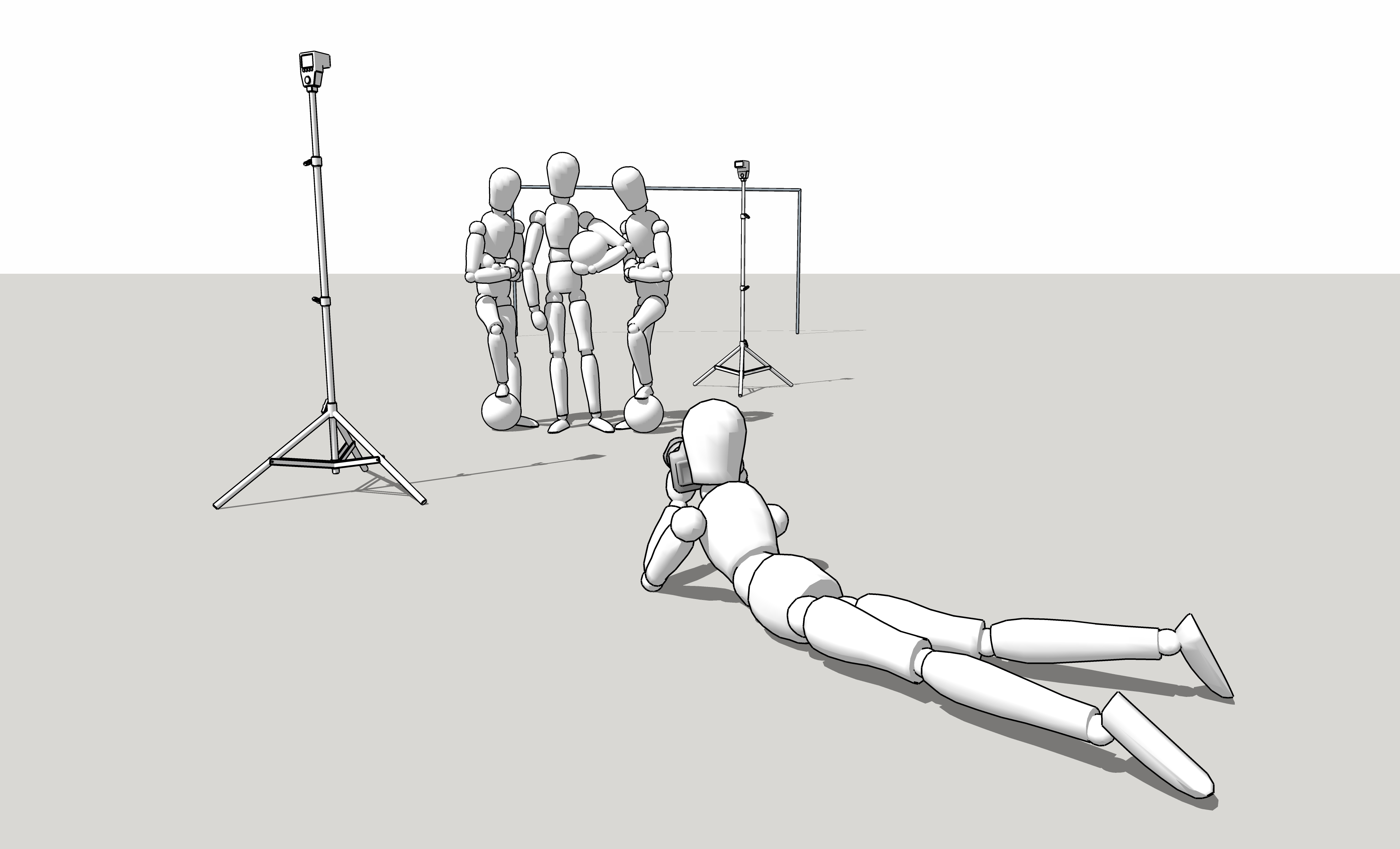