Using A House As A Reflector

Sometimes the best light is from an unexpected source: find out how I used the white wall of a house near my studio as a giant reflector for this portrait.

I frequently use reflectors in my work to soften shadows and bounce light back on to my subject’s face. The bigger the reflector, the better, as a broader light source is softer and more natural-looking (you also don’t have to watch out for the edge of the reflector’s bounced light). But if I don’t have a reflector to hand, or if there is a better alternative in the environment, I use that instead.

Using a house as a reflector

Here, the sun is behind my model, Katalin, and her face is lit by reflected sunlight from a nearby house. The house has a large end wall painted in a light colour and this is a few metres to the left of the scene (as we’re looking at it).

If you have access to a large, matt surface, then you can position your subject to take advantage of the light it reflects. Any colour on that surface will tint the light that’s reflected back, so look for white or very pale-coloured surfaces, otherwise you’ll have a lot of colour correction to do in post-production.

I’ve positioned Katalin in a strong, confident pose facing towards the wall, then asked her to turn her face towards me. The sun is lighting up the wall, with enough intensity that the bounced light has created modelling on Katalin’s face.

Modelling is a photography term for the dimensionality created by highlights and shadows on a subject’s face. Flat, even lighting produces shots without modelling. Directional lighting creates modelling. In this portrait, the near side of Katalin’s face has shadows along her nose, jawline and cheekbones. This modelling shows off the shape of her face and features.

The sunlight behind Katalin has created a rim light; an intense highlight on the edge of her back, outstretched arm and through her hair.

The trees behind Katalin are in the shade, so she is rim lit against a dark background, making her stand out even more. Even though her jacket and trousers are black, she is clearly defined against – and separated from – the dark area behind her, adding to the success of the portrait. 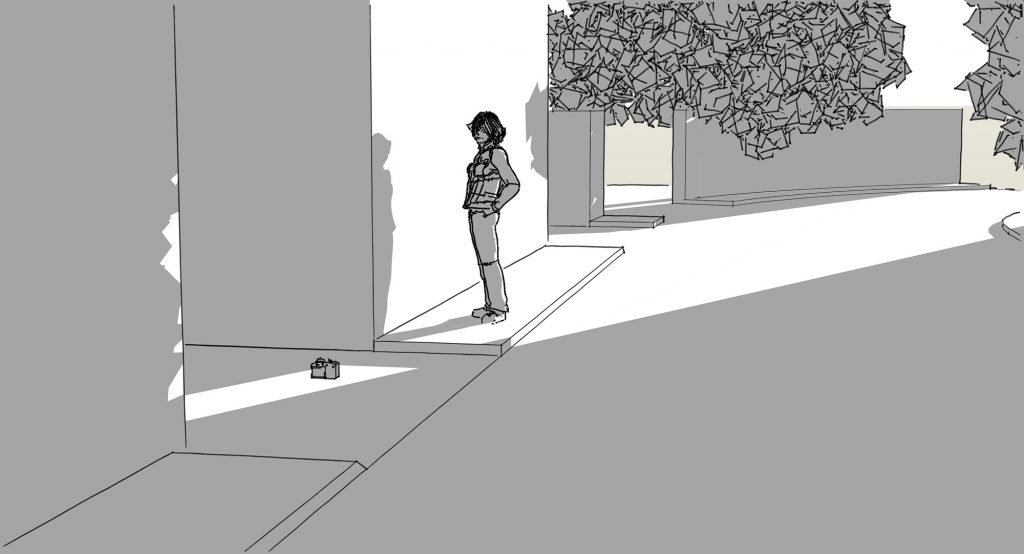