You can find top shade and framing devices in most natural and urban environments. These give your portraits great lighting and a stronger composition.

This portrait of Bryony was taken in the outdoor area that backs on to our studio; part of international architect Peter Aldington’s Turn End Gardens. I am incredibly lucky to have such easy access to a varied choice of spaces, but no matter where you’re shooting, you can almost always find top shade and framing devices nearby.

On sunny days like this one, the best place to find soft, even light is just under the shelter of some overhead shade. This could be beneath a building’s overhang, near the edge of a group of trees, or just within a porch or doorway, for example.

In our studio garden we have an outbuilding that has a walkway through it, with an arched entrance at each end. I positioned Bryony just inside the near entrance, so that no direct sunlight was hitting her face. Instead, the light is being bounced from the ground and walls around her, making it soft and even by the time it reaches her skin.

I’m standing under open sky, shooting towards the top shade that’s sheltering Bryony from the sun. I positioned her just far enough under the top shade – but no further – and asked her to face towards the archway’s entrance. This ensures the light is both controlled – it’s front on to her – and that there’s enough of it reaching her to pop catchlights into her eyes and make her the lightest part of the shot.

If you can’t find any ready-made top shade, you can always ask someone to hold a reflector (or a large towel/piece of cardboard etc.) above your subject to do the same job. Just crop in close to make sure you can’t see the outlines of the shadow it creates on your subject!

This portrait is a great example of using a frame within a frame to enhance a composition. The dark edges of the archway’s entrance behind Bryony add depth, context, interest, visual balance and a sense of place.

Instead of this just being a nice portrait of a beautiful woman, the viewer is given visual cues that suggest a narrative. The dark interior of the archway also provides increased contrast against Bryony’s light dress, skin and hair, helping to lead your eye straight to her face and keep it there.

Frames can be on one, some or all of the edges of the image – in this case it’s on the left, top and right. They can be in the foreground or background (as here) and can be created by whatever you have on hand, including foliage, trees, other people or building elements.

Before taking the shot, I adjusted my own position to control the placement of the frame relative to Bryony. I opted to position it so that the line of her body crosses the opening of the archway diagonally, bringing a touch of energy to the image.

I wanted to capture some slight movement in Bryony’s hair, so I asked her to turn her back to me, then swing her face round to the camera when I asked. This adds a little energy and interest to the shot, and also prevents the frozen, slightly pained smile of someone who has been asked to hold a position too long! 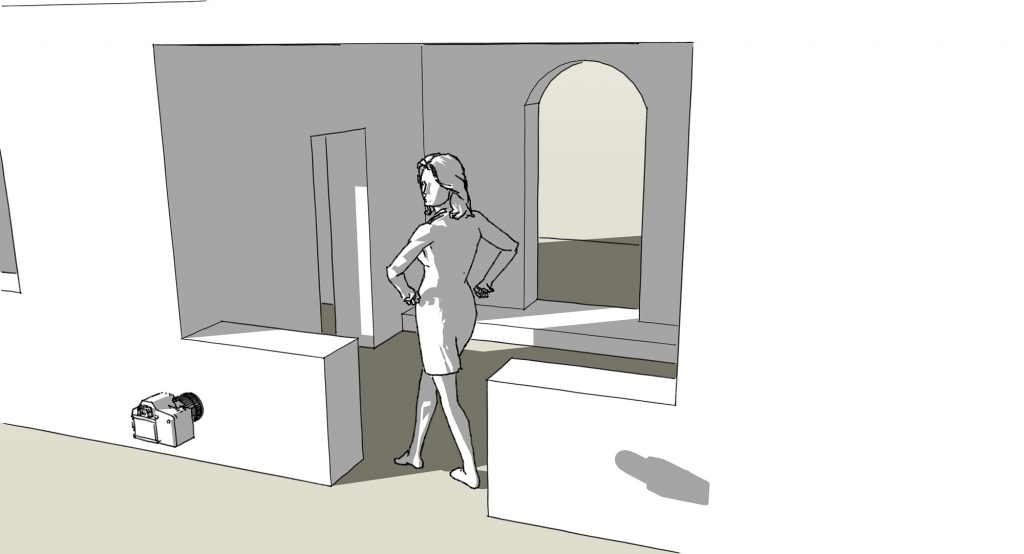