We were in the Mirage Hotel in Las Vegas as part of a weeklong trip to celebrate my 50th birthday. My wife Sarah and I had been here before for our honeymoon, and I’d always wanted to return with the kids. On this evening we were looking forward to Love, the Cirque du Soleil show based on the Beatles’ music. First though, we were fuelling up with a hot meal, and were midway through the main course when the hotel photographer drew up to the table next to ours.

I’ve never been a fan of this approach. When I photograph weddings, I actively recommend to clients that the photography pauses during the main meal. That’s partly because I don’t want to interrupt the food, but mainly it’s because I don’t find it results in particularly good images.

But I’m a sucker for photos of my family. Like most people, I don’t like having my photo taken, but still, the result is worth it: to me, family photos are the most valuable thing I have.

Despite this, I felt an increasing sense of discomfort. My eye had flicked back to the photographer a few times before he finally got to us, and there was just something off-putting about his demeanour. I had the strong impression he didn’t really want to be there.

As he worked the table adjoining ours, I noted the flat tone of his voice, the coldness of his body language, and the disinterest in his eyes. I wanted the photo with my family, but I didn’t want him to spoil our meal. I decided to insist he just take one picture and leave it at that.

After some bartering, a huff and a sigh, he relented and took a single image before moving on. Half-an-hour later, he returned to each table, handing out presentation folders filled with that client’s printed images, hoping they would choose to buy them.

For us, he had a single, matted print, and was unable to up-sell anything extra. It wasn’t a great shot, but I bought it anyway, as a record of us being together. We finished our meal, enjoyed the show and then headed off to the Grand Canyon a day or two later.

I have always wanted to do the Skywalk over the Grand Canyon. It’s a U-shaped pier that juts out 70 feet over the edge of the canyon, with a glass floor beneath your shoes – revealing every detail of the 4000-foot drop below.

For safety reasons, you aren’t allowed to take anything with you on the Skywalk: no wallets, coins, cameras or smartphones. This creates a perfect business opportunity, as you are a captive customer who can’t create your own record of the experience. Indeed, as we stepped out onto the Skywalk, there was a row of professional photographers waiting. One of them, Justin, came over and introduced himself to us with a beaming grin.

I wanted the photo with my family, but I didn’t want the photographer to wreck our meal. I decided to insist he just takes one picture and leaves it at that

I immediately felt my energy levels increase as he began interacting with us. He was practically bouncing with humour and enthusiasm, and immediately joined in with our family’s gentle teasing of Sarah for her strong aversion to heights.

I could see that all the photographers were going through a set series of images with every group of clients. I also knew that Justin’s employer would be trying to sucker us when we reached the other side, and pressure us to spend as much money as possible. I didn’t care. I was there with my family and we were all laughing. So we followed Justin’s directions for about 15 minutes and performed all the cheesy poses.

He didn’t slow down once, and his spirit drew us through the shoot in what felt like only a couple of minutes. At the end, he shook our hands, turned the camera off and revealed that he was finished for the day. We had been his last shoot, after many hours spent in the hot sun, repeating the same thing over and over. He was so upbeat that I never would’ve guessed it had probably been a long, tiring day for him.

Afterwards, we walked over to the screens to see the photos and bought every single one. Again, the shots aren’t that wonderful, or original, but I love them. Whenever I look back at those images from our holiday, I remember how I was feeling when the photographs were taken. I remember the two different photographers, as well as the awkwardness of one transaction and the sheer joy of the other. I know it’s not just me who does this: when our clients attend their portrait reveals, they often recall what was happening at the time a picture was taken.

Trust me on this: a great customer experience is just as important as the finished images. 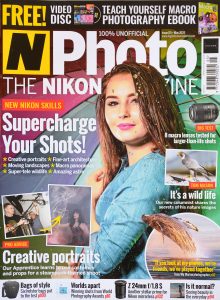 This article is adapted from my article in issue 110 of N-Photo – the unofficial Nikon Magazine,