Like the Rule of Thirds, the Golden Ratio is a guideline for positioning elements of the image within naturally powerful areas of the frame. It is an ancient design principle which states that the ratio of 1:1.618 is the most visually pleasing. This particular ratio has been found to appear repeatedly in nature (such as in the shape of a snail’s shell) and is one that humans are drawn to. 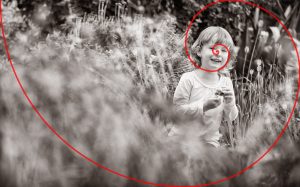 It can be used to divide the image frame into a series of smaller and smaller rectangles. A line is then curved from the outer corner of the first rectangle, through the corners of the second largest, through to the next and so on, until you have a spiral flowing through the whole image.

This ratio can also be used to create a guideline grid, which looks very similar to the Rule of Thirds, but with slightly different placement of the lines and intersections resulting in a smaller central box. In fact, it is possible that the Rule of Thirds is a simplified version of the Golden Ratio, but the latter is supposedly more refined and historically proven to be superior. Try both, see which you prefer, and – if one version isn’t quite working successfully in certain situations, switch to the other to see if that helps.