We’re taking our daughter to see The Lion King, and we’re passing time before the show starts. The tickets are tucked inside my camera bag, along with my trusty Pentax, loaded with film. This is 2002, after all. The camera bag is on the floor under our table. I reach for it and it’s no longer there. Our house keys, my wife’s purse, the tickets and the camera inside it have been stolen. A great day out quickly turns into a stressful evening.
A few weeks later I head into the London Camera Exchange with money from the insurers. I haven’t yet been paid for any of portraits I’ve taken – it’s just a hobby. I knew buying another film camera would be a short-term solution.

As an ex-drummer, I had already watched the analogue to digital revolution transform the music industry. Critics and commenters would proclaim that analogue sound was superior, but crowds were choosing CDs over vinyl. I saw the same wave was about to crash through the camera industry.

I asked the sales rep what was available in digital. The Nikon D1 was available but exceeded my budget. The sales rep suggested the Canon D30 so I picked one up and played with it. It was… fine. Seeing my unenthusiastic reaction, the rep mentioned that a new Nikon body would soon be available. It would be a digital version of the F100, he told me, and handed one of those over for me to try…

Change is in the air

When I picked up the F100, I felt excited. It wasn’t about the features or pixels, because this wasn’t the body I would be buying. It felt right at that exact moment. I have fairly small hands, and the F100 slotted straight into them. There was an instant connection to it, like the camera was just an extension of me.

I pre-ordered it right there on the spot and bought a 35-70mm f/2.8 lens and a flashgun too. Then I slowly counted down the days until my new Nikon arrived. When it finally showed up it was everything I hoped for and more.

One of the first professional shoots I did was of a young boy called Ben. His portrait, taken with the 6Mp D100, beat photos taken with newer, higher-res and more expensive cameras, later making it onto the cover of my book, Mastering Portrait Photography.

My most recent upgrade is the D5 [NOTE: this was first written in 2019 – I am now working with the incredible Nikon Z9]. I’m certain that mirrorless bodies are the future. Mirrorless cameras encounter fewer technical issues, like misalignments when focusing and parts getting jammed as the mirror swings up and down. But I don’t think mirrorless technology is sufficiently advanced to meet the expectations our clients have of our business, so we’ll probably be getting the D6 next. And I will be just as excited when that arrives as I was when I first held the F100 all those years ago. 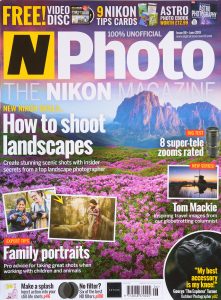 This article is adapted from my article in issue 98 of N-Photo – the unofficial Nikon Magazine,